Beatrice’s story is one of shock and outrage, due to the senseless cruelty inflicted upon a sweet, defenseless dog.  It’s also an endearing story of unrelenting strength and spirit of an animal who not only survived, but thrived. The steadfast commitment of a world-wide community that came together to give Beatrice the chance to love and trust again.  Here’s her inspiring tale…..

Stolen From Her Own Back Yard

On March 13th, 2014, Beatrice, a small five year old Chihuahua-Terrier mix, was in the backyard of her home on Wells Street in Milwaukee, Wisconsin. Karen Smith-Burns remembers that day vividly. Beatrice was playing with one of Karen’s other dogs when suddenly “the other dog went absolutely crazy.” Karen ran outside to find Beatrice had been stolen.

After 11 days of worrying and searching, Karen received a call informing her that Beatrice was seen wandering near Potawatomi Casino, not far from her home.  After another concerned citizen noticed the shivering dog trying to escape the cold, they contacted the Milwaukee Area Domestic Animal Control Commission (MADACC). MADACC responded quickly, picking the lonely dog up and quickly transporting her to the Milwaukee Emergency Center for Animals to be cared for by Dr. Marla Lichtenberger. 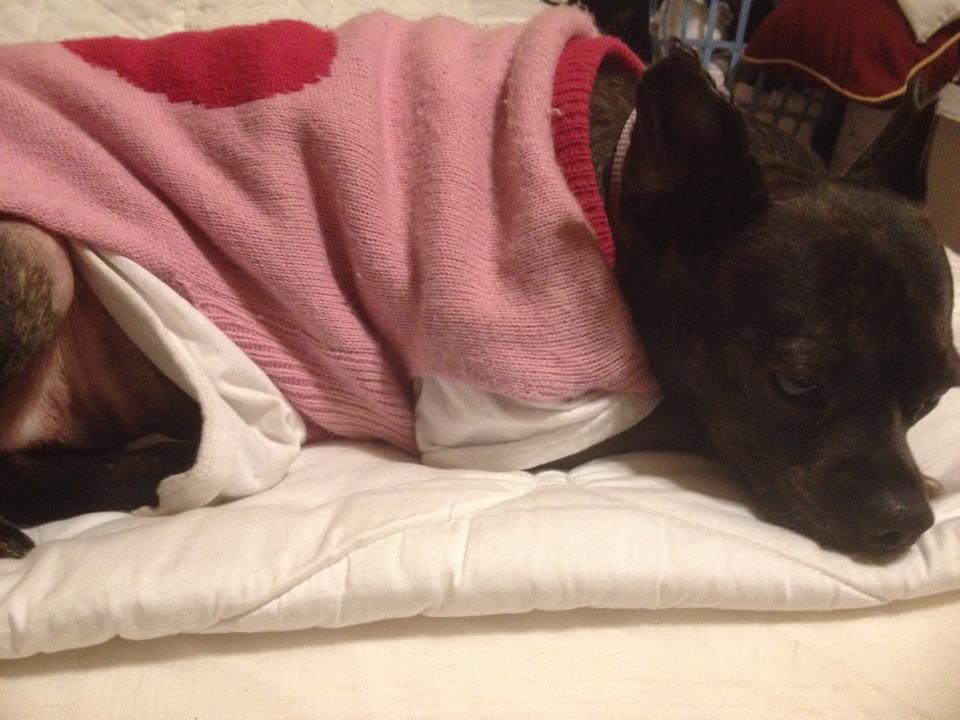 Upon Beatrice’s arrival, Lichtenberger immediately began life saving treatment. It was determined that after she was stolen, the lovable dog was purposely burned. 90% of her body had been completely charred.  After being scorched and left to die, Beatrice was now in the fight of her life.

Beatrice’s life was in limbo for days after being rescued. When she arrived at Milwaukee Emergency Center for Animals (MECA), her skin was falling off, she had deep lesions, and she lost a portion of her ear because it had been singed off. There were significant concerns about other vital health functions due to the severity of her burns.

Her medical care consisted of hydro baths and silver sulfadiazine treatment to sooth the intense burns and promote healing.  In addition, Beatrice needed constant IV fluids for dehydration, antibiotics for infection, and pain medication to help ease the immense pain experienced with burns. Dr. Lichtenberger knew Beatrice would likely lose a large portion of the skin on her body.

The staff at Milwaukee Emergency Center for Animals did everything possible to not only treat her considerable wounds, but to make her feel comfortable, and more importantly, loved.

After hearing about Beatrice, Animal Fairy Charities (AFC) immediately began the search to find the person or persons responsible for committing such a heinous act on an innocent animal.  The Milwaukee area charity issued a statement to all of the surrounding communities that a $2,000.00 reward would be given for information or tips leading to the arrest and conviction of the person or persons culpable for burning Beatrice. Debra Lopez, Executive Director of Animal Fairy Charities stated, “In the state of Wisconsin, animal cruelty is a felony and it is important that those who committed this act are convicted.  Research indicates that people who abuse animals often accelerate to harming people…we have to stop the cycle of violence.”  Citizens were urged to contact the Milwaukee Police Department’s tip line to report any information pertaining to the incident.  And they did….

On April 27th, 2014, the Milwaukee Emergency Center for Animals announced that Dr. Lichtenberger would be teaming up with board certified, John A. Weigelt, DVM, MD; a trauma and critical care specialist and surgeon from Froedtert Hospital and the Medical College of Wisconsin, in order to perform a pioneering surgery on Beatrice. The next day, on April 28th, Dr. Lichtenberger and Dr. Weigelt gained international notoriety and worldwide attention, as they performed a first-of-its-kind, groundbreaking pigskin transplant to save Beatrice’s life. The foot-long piece of pigskin used in the surgery was obtained via donation, and both Dr. Lichtenberger and Dr. Weigelt donated their time in order to perform the surgery without cost to her owner.

The pigskin transplant, which is medically referred to as a Heterograft, was carefully applied to Beatrice’s second and third degree burns during an hour long surgery for the purpose of providing coverage of burn wounds, relief from the pain and stimulation for healing of her own skin. There were a few areas on Beatrice’s skin that were purposely left uncovered, so that it would encourage her skin to heal on its own. This would provide her with greater potential for a full recovery, since it would enable her skin to breathe. This would be highly important, since it would increase the restoration of her skin, in addition to her overall rehabilitation. The initial intention was that the thin layer of pigskin would act as a natural dressing for her burns, with the long range goal being that the pigskin would eventually peel off as she began to heal and her own skin grew back in. Both physicians were highly encouraged following Beatrice’s surgery. She did extremely well during the surgery and woke up quickly. Immediately after the surgery, Dr. Lichtenberger stated that she was hopeful that the surgery would promote more granulation of the tissue and healing of the dog’s skin.

Following Beatrice’s two week checkup with Dr. Marla Lichtenberger, it was determined that it was possible Beatrice may require an additional skin graph after her initial surgery. However, both Dr. Lichtenberger and Dr. Weigelt were pleased with her progress thus far. Meanwhile, Animal Fairy Charities was doing all it could to help Beatrice and her owner with the quickly mounting medical bills by setting up a dedicated fund to assist with her costly, ongoing medical treatments.

It was clear that Beatrice was a very determined little dog and refused to give up. Beatrice’s struggle inspired many, due to her spirit and resolve to survive, in addition to sweet disposition that remained intact, regardless of what she had been through. “How could someone be so cruel? She is such a loving dog,” said Debra Lopez of AFC. “It’s amazing she is still alive after such terrible abuse, and yet she still loves unconditionally.”

Beatrice suffered a few setbacks along her path to recovery and unfortunately, was back in the hospital following her initial pigskin transplant surgery. However, prayers and well wishes came in from across the country on her behalf, with hopes that she would make a complete and full recovery. Donations, too, continued to pour in for her mounting medical bills from the U.S., Germany and the UK. World-wide, Animal lovers pulled together to rally for Beatrice with the same determination as she had…

On Thursday, May 1st, Beatrice returned to the Milwaukee Emergency Center for Animals, at which time Dr. Lichtenberger took portions of the pigskin off and replaced it with a new layer. Dr. Lichtenberger reported that Beatrice’s own skin underneath the pigskin looked “incredible,” indicating that the pigskin what doing what she and Dr. Weigelt intended for it do in helping Beatrice’s burns heal. Two days following the second procedure, Beatrice was able to return home. Her home care included proper bathing, hydrotherapy and application of topical ointments for healing.  On May 19th, the Milwaukee Emergency Center for Animals (MECA) announced that Beatrice was doing well and that the hope and goal was that she would be fully healed within a couple of months.

A caring citizen called AFC shortly after seeing a FOX6 news segment about Beatrice.  The woman reported seeing Beatrice a few weeks prior to the incident, sitting outside of her apartment complex with a neighbor, who told her the dog had followed him home. Not long after seeing the story of the badly burned dog, the neighbor’s girlfriend approached the witness. “She asked me if I wanted to come down to see the bathroom where it all happened. I walked in there and I almost puked. There was just burn marks everywhere, all over the bathroom, all over the tub. There was smoke all over the place. Like you could just see it. There was even smoke coming out from underneath the door like maybe where the dog was trying to get out or something.”

The witness immediately contacted Animal Fairy Charities to report what she was told and what she had seen.  She explained that her neighbor, Christopher Hanson, was currently in jail on unrelated charges.  While there, he allegedly asked his girlfriend to “clean out the bathtub.” The woman says she’s happy police arrived sooner, rather than later. “She was going to clean up the mess and destroy the evidence. Then the dog would have never gotten any kind of justice for what happened to it. I can`t even begin to tell you how bad I feel for that poor dog,” the woman added.

Upon further investigation, it was discovered that 21 year old Hanson was being held at the Waukesha County Jail for another crime.  He was arrested for stealing Beatrice and setting her on fire.  Despite assistance from Hanson’s girlfriend and evidence from the crime scene, the Milwaukee County District Attorney was “considering” charges.

Although charges were pending, Animal Fairy Charities issued the $2000.00 reward to the brave woman who came forward.  Beatrice and her owner, Karen, were in attendance during the presentation of the check.

By August of 2014 the district attorney charged Hanson with the crime. During the trial, prosecutors said Hanson went on and got drunk the night he stole Beatrice from her yard.  His attorney stated Christopher had a lifelong fascination with fire, which motivated the attack on the dog.

In July of 2015, more than a year after the incident, Christopher Hanson was convicted.  The then 22 year old pled guilty to a felony charge of mistreatment of animals.  He was sentenced to the maximum sentence of 18 months in prison, 2 years of extended supervision and was ordered to pay more than $9,000 in restitution to Beatrice’s owner.  The theft charge, for stealing the dog, was dismissed.

28th, 2016 was the two year anniversary of the revolutionary surgery that helped Beatrice’s badly burned body heal. Her owner says she is doing great, stating “She acts, eats, does everything normally. Plays just as she did before it happened.” Remarkably, Beatrice has made a nearly full recovery, despite the fact that it was initially thought she wouldn’t survive. Although most of her fur hasn’t grown back and it’s unlikely that it every will, her owner is thankful that she is now healthy and loves and trusts like she always used to before the attack. Beatrice’s story is filled with human cruelty…and human kindness. To her owner, she is the sweet, loving dog she always knew who she called “Bea.”